Amber is adjusting well to being home.  While I was busy doing typical Monday morning stuff with the other kiddos, then on and off with phone calls, then sliding in a grocery shopping while their grandparents babysat, Amber and Ryan were able to keep themselves pretty much entertained (and annoyed with each other) for a while.  Later on, while Ryan was napping, Amber and I were able to practice going up and down a flight of stairs as well as trying to motivate her left arm and hand with playing in some kinetic sand.  After that, we opened up a Princess Math Workbook that her teacher had given her and ended up blowing through 6 pages before it was time to head outside to get her sisters off the bus.

Today was a good day 🙂 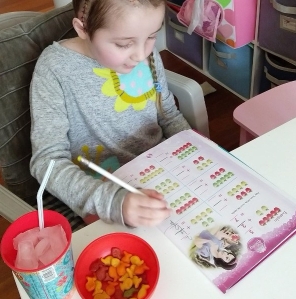